The statistic '% Arrivals RT-10m late' is the percentage of the time that the service arrived no more than 10 minutes late in the time period covered by this search (Mon - Fri between Wed 22 Dec 2021 and Wed 19 Jan 2022).

When looking at the average arrival time remember it is just the average. Sometimes the service arrived earlier than this, sometimes later.

To amend your search, scroll down to the search form below. For a more detailed search example and walkthrough, please see the Help page.

The chart below shows the actual arrival times for the services detailed above. Click on the chart to open an enlarged version. 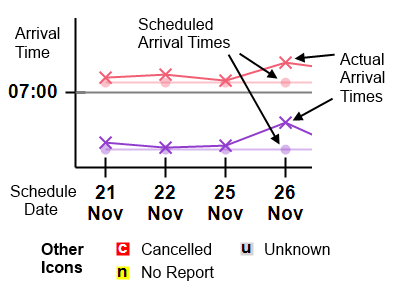 Data is present for all 504 hours in the time period being searched.

Grouping has resulted in 166 schedules, of which 0 schedules (= 0 services) have been hidden as specified in the search criteria.

Amend the criteria above to search again or open a new window (to start a new search whilst retaining these results).

The information shown on Recent Train Times is sourced from Network Rail via their Open Data Feeds, augmented with additional data sourced from the Rail Delivery Group via their Darwin system.